How to Never Run Out Of Ideas for Content 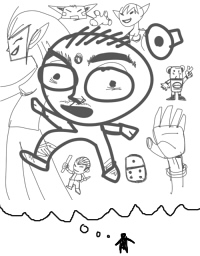 The goddess of creativity is on strike, and it looks like she ain’t coming back.

You can beg, but there’s no time for that. You need content, and you need it now.

What can you do?

First, you can stop relying on that whimsical god. She doesn’t exist. She’s just an illusion. The only person holding your creativity hostage is you.

But still, you need inspiration, right?

Here are my favorite three tips for unleashing your creativity so you can create great content:

Creativity is an inspiration problem, and that’s easily fixed.

You don’t have inspiration because you’re looking in the wrong places.

So start looking in the right places.

What are the “right places?”

Anything outside your current market.

If you run a blog on marketing, read articles about creativity. If you run a real estate business, look at internet marketing businesses. The ideas you’ll get from these “off-topic” places will help you discover new ideas.

For example, I launched a comic-based blog called “I luv Empire.” The drawing style is heavily Japanese, and the site design is from the video game industry.

See how I took inspiration from other worlds, and brought them into my world, to help me stand out?

You can do the same, so go do that now.

You’ve heard it before:

“There’s no such thing as an original idea.”

There are new combinations, though.

As a matter of fact, every “new idea you have encountered, is often just a combination of at least 2 old ideas.

What’s that mean to you?

Well, as you saw previously, I love combining unrelated niches because it helps me stand out from everyone else. It’s also engaging and entertaining.

You can do the same.

Choose something you want to talk/write about, and then combine it with something different, and you’ll create something “new.”

The combinations are endless.

And when you’re writing content, you can do this for each one of your articles.

For example, here at DIYthemes there was an article “What a 78-year old experiment can teach you about increasing your conversion rates.”

Two unrelated topics, combined together, as one.

Now go try it yourself.

This one sounds so stupid that your brain cells revolt, but it’s the “magic bullet” in disguise.

If creativity is a stream of consciousness, then having a determined mindset will make it flush like an endless layer of oil.

One of my idols, the infamous digital wunderkind Ze Frank, once said that his number one method of being creative is to simply expect y our creativity to happen.

That was his whole secret.

I have  used that principle, and I haven’t stopped cranking until this day. Booya!

Wrapping it all up

Seriously, if I hear people complaining that they can’t come up with ideas, I’m going to punch someone in the face (ha ha).

So get fired up and create something awesome.

And do it now.