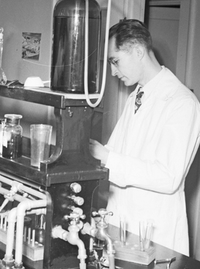 Test everything. We’ve all heard it. No one does it.

Because it’s a lazy way to run your business, that’s why. If you’re wondering how I could possibly describe all of that work (make no mistake, testing is work) as lazy, here’s the reason:

Making a point to test “everything” is basically an abdication of one of your greatest responsibilities as a business owner:

That responsibility is to be a good steward of your business assets (two of those are your time and focus). That means that you invest those assets in places that can provide the greatest return.

Testing “everything” is not one of those places.

Testing the right things can move you forward. Testing the wrong things will have you running in circles. You’ll make all your decisions based on numbers, but those numbers will be largely irrelevant to helping you reach success.

So what do you test?

To get the answer, look at it from the perspective of your visitor. We’ll walk through the major decisions he has to make as he visits your page.

Keep in mind that the goal is to create a system for testing that’s practical and easy. If it’s not easy you’re not going to do it.

So let’s focus in on just a few of the things that have a big impact on your sales:

The first decision your visitor has to make when he shows up at your site is whether or not to stay there.

If we’re talking about a typical sales page, your headline plays a huge role in this decision. I’m not talking about the color of your headline. I think testing like that is ridiculous unless you’re already generating hundreds of thousands of dollars in revenue. I’m sure there are exceptions but do you really want to take your chances on being the exception?

The important part is what your headline communicates and how it does that—the appeal. If your appeal is on target, he’ll start to read. If not, bye, bye.

Experts say that 80% of the success of your ad depends on the headline. I have no idea if that’s true and no one else does either. The bottom line is that a bad headline can send your visitor running, so it’s pretty much common sense that you’ll want to be testing that on a regular basis.

If you don’t have a headline, then what you’re testing is the appeal of the page. What is your big idea? What is the positioning you’ve created for your product/service?

So your visitor has read your headline and decided to stick around. The next question that’s going through his head is something like, “Should I spend even more time on this page or should I go back to Facebook?”

That’s really what this next part comes down to. Is your visitor attracted enough to your presentation to even stick around long enough to get the details?

Remember the last time you went to a web page that was selling something and, for some reason, you just didn’t feel it was worth digging enough to even figure out exactly what the offer was?

Maybe the sales video put you to sleep…

Maybe you simply didn’t trust something about the company…

The device that keeps the visitor on the page after those first initial seconds really varies with each specific situation.

If you have a long form sales letter, it’s probably your lead–the first few paragraphs or so where your reader either says, “This sounds good,” or “Not for me…”

If you’re selling with video, then it’s the first part of the video where he’s either thinking, “Tell me more…” or “Snooze…”

Ask yourself, after the headline, what part of my page has the power to draw people in or repel them?

Rotate in a new video…

Charge up your bullets…

This might not seem like a very important part of the process. It’s a little bit fuzzy and difficult to talk about in general terms. But there’s nothing worse for your business than having spent good money attracting a qualified prospect only to lose him because he got bored.

So figure out where this “Decision #2” happens on your page and start testing alternative ways to keep your prospect glued to the presentation.

Should I buy this? That’s what every visitor is asking at some level.

In addition to all the ninja marketing tricks we know about how to get your visitor to say, “Yes,” a large part of that decision really comes down to one thing:

Is your offer awesome?

Not enough focus is put on the OFFER. That’s really the most important part of the whole puzzle here.

Marketing experts talk so much about getting great copy when it’s a whole lot easier to just focus on creating an offer that blows your customer away. You offer so much value they can’t resist.

Test your offer. That means adding/removing stuff, changing the price, payment terms, etc. Be creative and keep rotating in the changes.

How to Do It

The easiest split testing software out there right now is Visual Site Optimizer. You can setup a simple A/B split test in just a few minutes.

Testing your offer gets a bit more complicated… but not really.

Once you get your winning headline, setup a new A/B split test between your two pages with different offers. Done.

I’m sure there are fancy ways you can do this all at once, but I don’t really care. The point is to make this simple, because it is simple.

If you got to this point in the article, you might think all this sounds like common sense. That’s because it is. Well, it makes perfect sense, but it’s far from common.

If you are one of the few who actually test on a regular basis, to you I say “congrats.” But there’s no prize because this journey has no end. Just know you’re better off than the guy who isn’t testing.

If you aren’t testing at all yet, then get started. Just don’t test everything. That’s a recipe for failure and burnout.

Testing has a place in your sales system, but you have to keep it in perspective. So the next time somebody tells you to, “Test everything…” Just give a polite smile and go on your way. Because you know better.